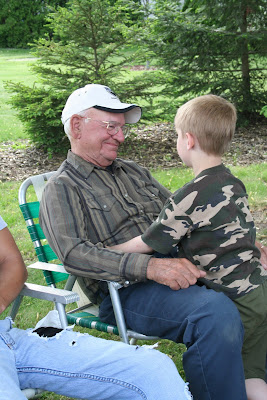 Hey, will you guys all stop what you are doing and say a prayer for my grandpa?  he is back in the hospital (after only getting out a few days ago) with a brain bleed.  Before Kobe's birthday party he was not feeling good after hitting his head.  He went to the hospital a day or so after Kobe's b-day party because his head hurt so bad and they found out he had some bleeding in his brain.  He is now back in the hospital and a different area of his brain is now bleeding.
I am not used to my grandparents or parents being ill or hurt, this is a new thing for me.  Please be praying that God will heal him!
Posted by Leah Wentzel at 4:45 PM

We will keep him in our prayers!! keep us posted on how he is doing!! =)

Tues. night 11:45
To all ..... thank you SO Much for your prayers. They sure got answered fast!!!! Papa is home (Yay) and the new bleeding wasn't new after all, it was the older bleed and had just moved and was much smaller. Since it was in a new place it caused a lot of pain. He has some new meds that should take care of it and he should be on the mend and good as new very soon. He promised he won't go hunting again without a helmet on :). Thank you again. Love you, Gram

So glad your Grandpa is doing better. God is so good.

Thank you for the update siretap.