At least we are doing something right :) 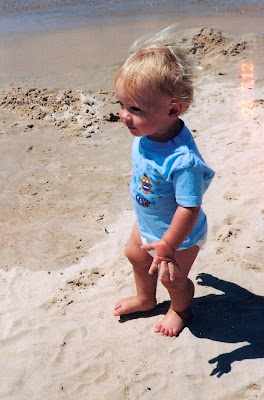 *Kobe in Ludington at One Year Old* 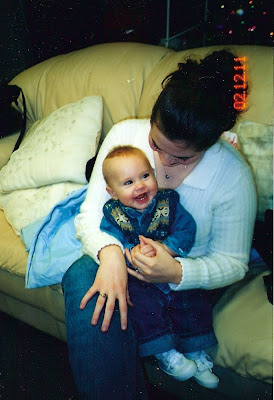 *Kobe at Six Months at one of Alyssa's wedding dress fittings* 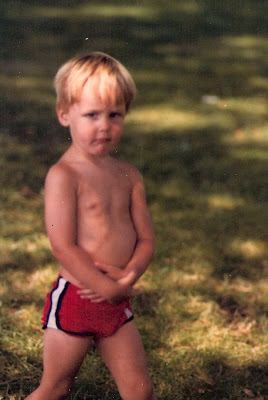 *Ben between 4 and 6 years old I imagine perfecting the pout he would later see on his own child's face about 20 years later*
Parenting is a wonderful mix of trial & error.  Somethings work and somethings don't.  Some times you worry you are spoiling your kids too much, some times not enough.  But, every once in a while they prove to you that something that you are doing is working.
Kobe and I pulled in the driveway after school and I parked the car at the end of the driveway.  I hit the garage door opener to open the door and told Kobe, "You can run in the house if you want, I am going to get the mail."
I hop out and so does Kobe.  He runs in the house and I walk across the road to get the mail out of the mail box.  Before I turn to walk back across the road to the driveway I see Kobe back out side watching me.
I walk across the road and say to Kobe, "What are you doing back out here?"  He replies, "I had to make sure you didn't get hit by any cars crossing the road."  and runs back in the house.
Saturday Kobe had one of his basketball games.  His coach was away at snow camp with the teens, Ben had to go to work and Grandpa Wentzel was up north at Grandma Corey's funeral.  That left me as coach of a 6-8 year old boys basketball team.
During the game the boys did great, they had fun helping me figure out who would go in and who wanted to sit out.  I think they all managed to score some points too.
One of the little boys on Kobe's team is named Carter.  He is a sweet little thing and seems a little nervous out on the court.  At one point he started to cry about something during the game while he was out on the court near his dad.  I heard his dad encourage him very nicely to stop crying and have fun.  I walked over and ushered him away from his dad and back onto the court.  After I took a step away from Carter Kobe came over and put his arm around Carter and told him it was ok and encouraged him to have a good time too.
I watched David during the day for a couple days while Bobbie was giving birth to Noah.  Kobe and David obviously have a huge age gap (about 5 years) so, of course, David is happy to follow Kobe around and touch everything Kobe does.
Kobe and David were playing with the bathroom door, I know, we are the picture of safety around here, and David stuck his fingers into the gap between the door and where the hinges are and smashed his little fingers.
Kobe yelled for me even before David made a sound and when I got there Kobe was rubbing his head and comforting him and checking his fingers to make sure they were ok.
After David was finished crying and back to his typical little self Kobe was still walking around with a look on his face and I asked him what was wrong.  Kobe said he just felt so bad for David's little fingers.
All while David is/was here Kobe played with him, did things to make him laugh and would let David touch most of his stuff :)
While my child is not a saint, he is turning into the type of child I hoped he would.  I am sure that is 100% because of God and not us, but I am thrilled to see God do it!
Posted by Leah Wentzel at 7:29 AM

KObe really is a sweet kid. Ryan and I really enjoy when the family gets together and we can hang out with Kobe and Brook!

kobe and brook enjoy that too! they really gravitate towards you guys-it cracks me up!

You are both doing a great job, and have a great boy:)!

Kendra was just asking today to see him:)

oh, that makes me sad :( i wish we all lived in the same place!

Kobe is a very kind, sensitive boy and is tuned into peoples feeling. That is so cool. You guys are raising a really nice boy.

Those pictures of Kobe in the different stages are adorable.

Thanks for the comment on my blog. I just came over and read back a ways on yours and wow. Not only does it seem like we have a lot in common, but your blog is great and I am totally adding you to my google reader. You have a beautiful family and I enjoyed all the posts I read.

I wish you the best in the foster care thing, it's one of the hardest things we've ever done, but I wouldn't change it. I saw you talking about taking multiples...LOL...I admire anyone that can do that, the one time I took two, I was pulling my hair out. Mostly because I already had two and ended up breaking up fights the whole time, but that's a whole nother story.

Anyways, I will be back. Keep us posted on what happens. Thanks again for the comment!

cobe is so precious!

Kobe is a sweet little boy!!! I KNOW brooklyn LOVES to have her play time with Kobe!!! lol =)