Why not miss 3 of the 7 last days of school? 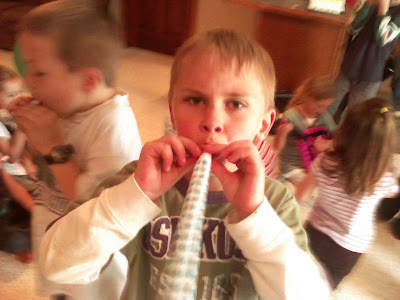 Kobers has strep.  We caught it very early and he is on antibiotics now.  When I went to the doc he said both his own kids had it and by 9:45 am that morning he had already tested 3 other kids positive for it as well.  Sounds like it is going around.  I suspected that was what he had because he threw up for no reason.  It has taken 7 years, but I am finally figuring out when he needs to go to the doc and when it is something the doc will say "you just have to wait it out".
He will be officially non-contagious in a hour, by Monday he will be over it I am sure.  Party's still on :)
Posted by Leah Wentzel at 5:36 AM

A mom really gets to know her children. Glad Kobe is on antibiotics. Looking forward to seeing all of you on Monday.

Glad you knew to take him in too! Glad he is on antibiotics to kick that booger:)! I have an appt to take Kendra June 3rd to the Greenville ENT to see about getting her tonsils out. They have always been Huge, and I think they may be affecting her sleep.

Wish we were there for his party! Love you, Kobe!!

Well it's going around our school also and chicken pox

hopefully we have had our fill of chicken pox :)