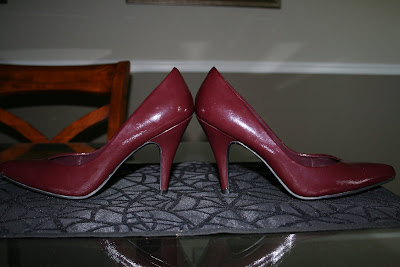 *Who knew burgundy pumps could make dealing with a Bio Mom seem some much less stressful (these are a lot darker and prettier in person-the camera washed them out-and yes, that is the table runner you gave me Alyssa :) )*
"But I say unto you, Love your enemies"
Sometimes, a lot of the time, I feel like I am stuck in a game of tug of war with S's mom. From the beginning I have talked to S about her mom, I tell her "We are gonna go see your mom today!" the days she has visits because if she has to go I want to her to have fun and remember who her mom is especially if she ends up going back home.
As much as I am so glad that S is comfortable enough now to show emotion, it is hard. She asks if we are going to go see her mom almost once a day. I opened the dialog, I brought it up, but, it is sad to have to tell her no 6 out of 7 days a week.
And, ever since S cried when I tried to hand her back to her mom during one visit her mom has been doing little passive aggressive things at me that involve S. They aren't a huge deal, but when I drop S off at her visits her mom will pick her up and say "Your MY baby" a couple times and I know it is more to me that S which I think is ridiculous. Say it to S and mean it, fine, but using words you are saying to your child to get at me? Grow up. And quite frankly, if you didn't suck just per the fact you got your kid taken away, I think you officially suck now.
So, as I watch her do things at each visit that prove she is incapable of being a productive parent, I feel the tug. The tug to not want her to go back to that and turn out like that. And I see some of it in her. I see the "slowness" that they all have. I see the lack of common sense. I see the vindictiveness. I know she's only two, but it's there.
Yesterday, S asked me again:
"You Kobe's Mommy?"
"You my Mommy?"
and then she cuddled up to me and said "I luves you" just like she always does.
She did tell me something different yesterday. She said, "I have two Mommies" in her shortened two year old talk, then said "Both Mommies"
I feel like I am playing a game that I was told I would lose from the beginning. They told me she was going to go home. In September. Well, that didn't happen but still. We may be in for two years of "second chances" for some one who may or may not deserve them. And in the end, who loses? It's not really me. It's S. Because no matter WHAT happens she is the one that will have attachment issues. She's the one that will have at least a year's worth of pictures of her life that don't include any of her biological family in them. She's the one that will have to grow up in poverty. She's the one that will lose her ONLY Daddy & Grandpas.
And yet, I feel sick because at the end of the day she still LOVES her mom and I don't want to mess with that, ruin it, or take it away. Even if the court some day takes it away I hate the thought of her being sad about it. Because she will.
I feel ill prepared to do this a lot of the time. I don't ask God why HE chose this for me, I just wonder what made Him think I could handle this the way it should be handled. I am short tempered and not very patient. Sometimes I think God chose this just to MAKE me give up any "control" I thought I had of my life, and trust me, it is doing the trick. Sometimes I react horribly and think, "God, if you knew I was going to do that why would you choose me for this?" And today, I don't have the answer for that. He does, but I feel like a failure.
Love your Enemy. I don't think I have EVER been put in the position to actually have to suck it up and do that. Until now.
Posted by Leah Wentzel at 8:22 AM

One of the things I love about you Leah, is your honesty. Thanks for sharing your heart. We will know how to better pray for sure.
I like what you said in your last paragraph. I too have been in the position you are of loving your enemies as God says. I know how hard that is.
Pray for her. Continue to love her sweet sweet girl, and pray, pray, pray.

wow, this is such a familiar story. I feel like you just explained our first experience with foster kids. the good news is we still have munchkin. the bad news is that vindictiveness you see at two that is very much hereditary will be a battle that you will still be fighting at five. Incredibly hard, but just keep holding on...someday we'll all get through it! =) I'm still holding on for someday myself! lol!

Wow! My thoughts and prayers are with you, Ben, Kobe and S.

Your transparency is refreshing, many, many parts of what we are doing really do SUCK! Especially the dealing with Bio Families...but God will sustain us, and He did pick you because He knew He had given you just what it took to do this work in the lives of children! Prayer for you!

Oh, and I loved your table runner ;-)

I heart you. You are doing this so beautifully and honestly. I can't imagine the difficulty and confliction of emotions you must feel, day-to-day. You encourage my heart and inspire my day...how much more you are doing for your precious little "S" girl.

Keep push'n on and keep wearing those killer heels!!

LOVE the heels!!!
You guys are doing a great job with "S" and are giving her a loving family that she can depend on!! Keep doing what you are doing!! We are all praying for you guys!!
Tomorrow we go get finger printed...again!! It is looking good, but I am afraid to say it out loud!! lol

Hey, I notice you comment a lot on Faith's blog, so I thought I'd drop by and read a post or two. Enjoyed reading your openness and honesty here. I'm not a parent yet, but have seen others go through this same situation with foster kids and bio families. I had a foster sister growing up and I remember, even as a kid,my parents battling things with the bio fam. She lived with us for 2 years before the Great-Grandma got full custody of her. Her Mom was a druggy & she didn't know her dad. She had about 5 siblings, all had different dads. And only 3 of them lived with the Mom. It was hard at times, on our family, going through a lot of what you're going through now. Hang in there and keep strong. I know it's hard, but you can do it! I like your scripture about loving your enemy. It goes along with a scripture I read this morning in Luke 6:27-28. Anyway, so for the long comment. In short. Keep loving. Keep showing Christ. In the end, that is all that matters.

Shelly, I know what you mean about not wanting to say it out loud, but I am super excitedly optimistic for you guys.