Last week was spirit week at Kobe's school. Monday was DRESS CRAZY DAY so I helped Kobe look as crazy as he could. At one point he looked at me and said, "Are you sure "crazy day" is today?" I think he was a little nervous about walking into school looking so silly. He is a lot like his dad that way, Ben is not a fan of dressing up or acting "stupid" in general so that is my department :) When Kobe got home he told me that he was dressed the craziest out of everyone in his whole class and everyone wanted to talk to him and when they would see his they would say "Whoa! Look at Kobe!" - he seemed to enjoy all the attention. 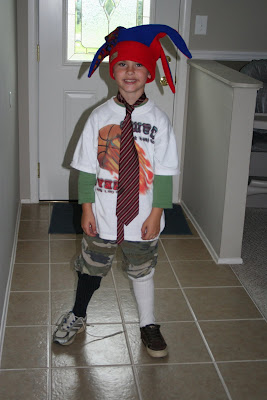 Tuesday was "wear PJs to school" day and Kobe was very excited about this. I had to go out and buy him some slippers and some PJ pants that didn't "show off his booty" too much. he he Another kinda funny thing was that Kobe wanted to sleep in the PJs so he wouldn't have to change his clothes in the morning. I almost did not agree to this because I thought it was kinda icky but he seemed to think that idea was "cool" so I let him. 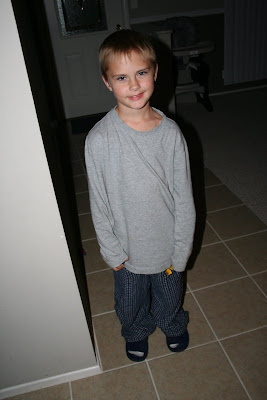 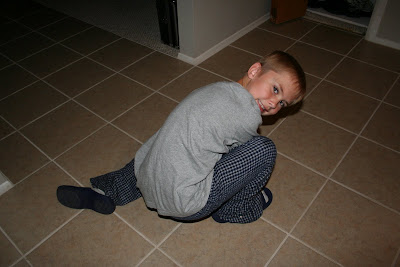 Wednesday was "Class color & stuffed animal" Day - no picture
Thursday was "What you want to be when you grow up" Day...and Kobe picked a Mad Scientist. I thought that was an interesting choice. 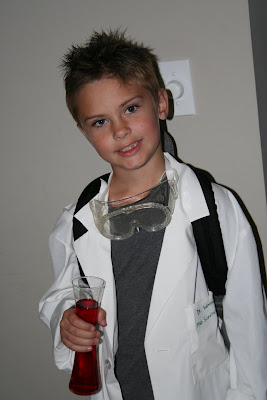 Friday was "blue & white"day - no picture.
He had alot of fun that week. Each day the kids got special treats and on Friday they had a wagon parade that was cute. Each class decorated a wagon and paraded down the hallway. I might be able to post video of that tomorrow.
Posted by Leah Wentzel at 9:25 AM

love the outfits!! hilarious and fun!

That is great!!! I didn't really take any pictures of Brooklyn. She is not a fan of being to crazy either, but she did have fun that week. I was so hoping to be there on friday to watch the wagon parade, but I got called into work. Cute pictures of kobe!!! =)

I love pajama day! That is probably my favorite day at school also.

Oh, the joys of Spirit Week :-) LOL
Cute pictures! I love the scientist one. He looks too cute!

Love the "pose"! Kids are so funny!

What cute pictures. You do have a cute kid dress up for spirit week.