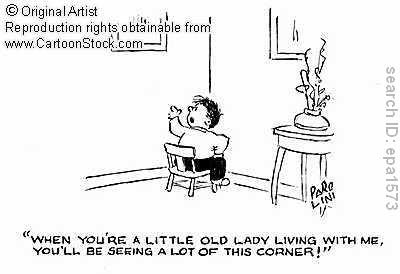 Oh how I could go on and on and on about what happens when the state ties your hands and says you can only disciple a child in the ways they approve of. We all see how good the state is doing - why shouldn't they be in charge of something as important as raising our kids.
Anyway, it turns out that the general rules they have set up aren't all wrong. At first I thought they were, but as I have had to deal with children that have spent years going from one unstable situation to another or have lived their whole lives in a volatile situation you see that the same methods that you use on your "well adjusted"child are almost a joke to these kids.
For example, almost no matter what form of time out/whatever punishment I think up that I try to use on K is a drop in the hat to him. When I put him in time out, no matter how long, once he gets out of time out it is still like he got away with something because I didn't physically use some form of extreme discipline on him like we assume went on in his other foster home. He literally gets out of time out with a look on his face that screams "is that all you got?"
Also, when dealing with normal kids and disciple, the things they do make sense. Most of the time. K likes to do random, out of the box, never saw it coming things. Like, throwing things, hard objects, at light fixtures. What could the fascination possible be besides trying to breaking them??? But he hasn't broke any yet. He doesn't seem to try to break them...he just like to throw things at them. Hmmmm...
And, S, Oh S. She is something else. She may not throw things at my lights, but she is just snasty sometimes. She is miss passive aggressive, ignore you to control the situation, manipulative, everything is all about me girl. Now, some of that is just the terrible twos, I hope. But some of it is not.
I guess what kind of spurred this whole post was our little intervention this evening. Today, all day, she has just been not nice. I could write a list a mile long of all the not niceness that has gone on but I will spare you. Often I find that the most off the wall way of handling these kids is the most effective.
Tonight, she managed to work my last nerve. I called her and the boys into a room. I explained to S that everyone in this house is sick of her being not nice. I told her that no one wants to be friends with someone that is mean to them ALL THE TIME. I had the boys look at her in the face and tell her what she had done that was mean to them and how it made them feel. Kobe actually cried during this. He was very honest, was not interested in hurting her feelings, he merely told her what she had done and that it made him feel like she didn't like him. Eventually S started to understand too and she cried as well. She understands far more than what most would give her credit for. She has some serious social issues that fall under the "the apple doesn't fall far from the tree" category. She has regressed so much since starting the weekend visits that she doesn't talk to really anybody except me and K. She will talk to Ben some, but if he puts in no effort she stone walls him.
I think tonight, as much as she could, she understood what we were trying to tell her. We may have to repeat this everyday before she truly understand, but I want her to see other people. I want her to feel.
So, as insane as it seems to even me, I will keep having these emotional interventions as often as we need to bring S into reality. She's worth it.
PS Her mom called today, the van has a bad tire and they can't fix it until next wednesday. She can get a ride here to get S but not back. So, we will see if we are going to have a visit this weekend.
Posted by Leah Wentzel at 5:14 PM

Being a mom is the hardest job there is. hands down :) I understand, Leah! Without God's help, I don't know how I do it some days. There are moments where I will just stop and start praying out loud, "God, please help me to have patience to deal with this situation in a way that is pleasing to you, and so the kid's will understand their need of YOU!" They all just freeze, and stare at me. It works every time though :0 LOL
Love you! Keep leaning on your rock! He is bigger than all of our "issues"!

I have no advice for you when dealing with a situation like this. I think you have to go with your "gut" feeling. How did the intervention affect K ? I'll sure pray for you a LOT. Love you.

i'm sorry... that is tough. we deal with and have dealt with a lot of difficult behaviors. keep seeking the Lord... you are doing a wonderful job!

What a roller coaster all of this is. You're doing a great job and teaching all of us life lessons.

K thought it was funny. he would tell her but would laugh the whole time.

Leah, I do understand some of the Kenny stuff. Our boys at school get so mad one broke our water fountain. I can't even imagine what they have been through to have all that aggression. Hang in there.

I have a god-daughter with a lot of anger issues. I am reading a book suggested on Reeses Rainbow, that I wish I had while she was living with us. It is called The Connected Child. I also have found some help in the blogs at Adoption Under One Roof. It is so hard to know how or what to say or do to help a little one who has been hurt so much, and who has the power to make you so angry at the same time! I will be praying for K and S and your family. :)
Kym