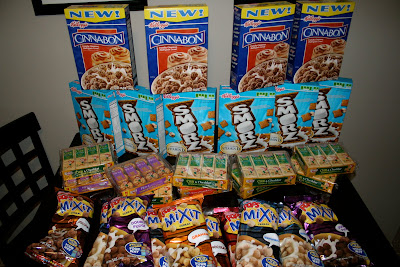 This weekend was just a "normal" weekend for us. Ben stayed home which was nice and we just did whatever we felt like.
Saturday morning I had some work stuff that need to be dropped of so Ben and the Kids did that for me and I ran to the grocery store. I got everything in this pictures for less that $3 on Friday night and I went back on Saturday and got even more for around the same amount. Since getting Lizzy I haven't been on top of every sale, but I still do pretty good and know what to look for.
S went to her mom's house, that was "interesting". The agency we work with has a fund to help bio parents out with gas money if they have to drive quite a ways to come see the kids. Well, at the last minute they called S's mom and said that they couldn't pick up a check for gas money this weekend and that they would mail it to them. S's Gma is the one who pays for everything and she is a school bus driver and isn't working right now. From what I hear every Aug/Sept their utilities get shut off from her not working. Well, when I was dropping S off with them they told me the agency had just called them and told them they couldn't pick up the $20 for gas money this week and that they were very close to being on E and that they weren't going to make it home but that the agency had told them "it's too late to cancel your visit so figure it out".
Don't get me wrong, I WANT the agency to stop doing everything for them and make them prove they can take care of S, but as Gma is standing there trying not to cry, the weight of the world on her shoulders so heavy that she was physically shaky, I just couldn't tell them myself "Too bad figure it out."
So, I did exactly what I would have told any other foster mom NOT to do, I put some gas in their tank. I didn't hand them cash-I'm not THAT stupid-but, here they are putting my little girl in their car telling me that they aren't going to make it home. (I must add in here that S's mom is acting like Gma is just going to have to figure it out because Gma is the one that does everything)
I wanted to let them run out of gas, have no one to call and have to have us pick up S but I am so sick of having to encourage them to fail...I'm just sick of it. I know that no matter what I did the judge will still send her home-or not. But, I am sick of worrying if what I do is making us loose her. I can't worry about it any more. I am not a jerk, I do help people who need it and I'm not going to look at two people who have NOTHING and think "I want to keep your child too". I don't understand how to deal with this correctly and I am muddling through it as best I can but I'm not a monster and I am not going to give up who I am and who I am supposed to be in hopes that I can keep my daughter.
Can you tell there is a little inner turmoil going on? :)
Posted by Leah Wentzel at 6:24 AM

As hard as it was, you definitely did the right thing :)
I know a little bit of how you feel. One of my foster sisters is in the middle of divorcing her abusive, drug addicted husband, and really I just want to do everything I can to help remove his rights to the two kids and never let him see them again. But I know how much the kids love their dad, even if he is a total looser.

BTW, I love that you are a sale shopper :) I once got $95 worth of groceries for $13! I don't think I'll ever throw that receipt away!

Leah, God shows compassion on us everyday...He wants us to do the same for others. Hard or not, He is in control :) Praying for you friend