"Be joyful always; pray continually; give thanks in all circumstances, for this is God's will for you in Christ Jesus" (1 Thessalonians 5:16-18). 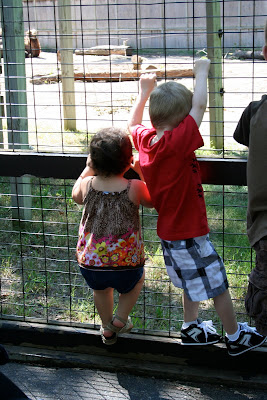 As soon as I determined to live my as a "Christian" or as most people in Christian circles call it "got saved", my mind immediately was flooded with that all mighty question:
What is God's will for my life.
I'm not going to lie, I thought one day there would be a sign equivalent to a bolt of lightning that would point me down the path that I was meant to go and that would settle, well, everything.
Shockingly, *smile * this did not happen. At least it didn't happen the way I thought it would. See, I thought God would, in a way, show me the whole picture. I mean, when we decided to adopt that was the kind of picture that I was thinking of. I wanted to adopt, through a string of events we felt God lead us to adopt, so that should have been it right?
Wrong.
See, I wanted to jump in, get the kids and get out-as I have said before.
Boy was I wrong! It is so strange to think that we have already let one go. No regrets, just not what we planned.
We are getting ready to let another one that has been a part of our family for over a year go if that is what God has planned. Definitely not the plan I was thinking of.
So, yet again I found myself wondering "What is God's will for my life?!?!?!?!"
And then, as I sat in a room with several women I had never met, next to a woman I had never met, she shared a verse that explained everything.
"Be joyful always; pray continually; give thanks in all circumstances, for this is God's will for you in Christ Jesus"
As soon as I heard it everything became very simple. It wasn't about what the outcome of our plans are, it is about how we react to the things God places in our lives.
Saturday I took the kids to a zoo with my sister, her kids & my parents. Before we even left the house Lizzy started off the day badly by refusing for saying sorry after she did something she shouldn't have. It took Ben stepping in to get her to obey. I had no idea that it would only be down hill from there. SHE SCREAMED THE ENTIRE TIME WE WERE AT THE ZOO. If her bottle of water had the cap on she wanted it off. If she was in the stroller she wanted out. If I wanted her to stay with us she she ran off. If I gave her food she didn't want it. If I said stop she did it anyway. It was just B.A.D.
But, it is within those moments that God's will for my life is right there for me to grasp:
"Be joyful always; pray continually; give thanks in all circumstances, for this is God's will for you in Christ Jesus"
All I have to do is do it. That's IT.
Now, don't get me wrong, I didn't do it perfectly. I got mad at her and I reacted badly a couple times but I did ok on the joyful part.
Can I tell you why?
This weekend S didn't go to her mom's house, she was home with us. Now, they would tell you it was because they didn't get their gas money in the mail so they couldn't afford to come and that s's mom was SO sick and didn't want to give it to S or any of us, but even she doesn't know what really is going on.
See, last week - remember when I had had it? Remember how I wanted to stick the girls in respite care, but decided not to? Well, one of the reason I had wanted to was because Kobe starts school this Monday and when S comes back from her mom's house on Sunday evenings she is hard to deal with, wants to stay up until midnight and quite honestly it is mentally exhausting to deal with. All I could picture was her getting home, wanting to staying up until midnight and then me trying to drag her out of bed on Monday morning bright and early to take Kobe to school and it being a disaster. It used to be a no brainer and not a big deal, but now everything is a big deal. So, anyway, as we all know I decided not to do that because it would scare them.
Now, here I am, blessed to get a weekend with S home and it is the weekend that I wanted to avoid her going to her mom's house so badly that I was about to hand her off to a stranger-but didn't. Instead God stepped in and gave me exactly what I needed when I needed it. A weekend off from the visit and a shot at a great first day of school for Kobe.
All day while Lizzy screamed I couldn't even feel sorry for myself one bit. I was so thrilled about God taking care of everything I just mentioned that even toting a screaming 1 1/2 yr old through a zoo ALL day couldn't take away the joy I had from seeing God move.
And, don't think the devil wasn't stirred up enough by my being encouraged that he is above trying to ruin my weekend with S home. He liked me right where I was two weeks ago, miserable.
It is hard when he uses your kids against you, but when I saw how she was acting it just made me realize that I need to spend a lot more time praying for my little girl so that someday she won't be like this.
God cares and He spelled out quite clearly His WILL for us.
Posted by Leah Wentzel at 6:28 PM

so beautifully written. I LOVE THAT VERSE. yes, that is what it is all about, not us getting what we want or having an easy life... but joyfully honoring God.

You are doing great. Keep it up! Keep seeking God and hanging on! Praying for you.

God is so working in your life and you are wise beyond your years.

There is more to say, but it is late. I just wanted you to know tonight that someone hears and understands and thinks that you are right on.

Thank you for sharing that, it is SO true, but sometimes it is SO hard to be joyful in stressful or difficult circumstances.

The places in our life where we can't see the joy, where we cannot see that "All things work together for good to them that love Him and are called according to His purpose." (Rom 8:28)

Leah, you are amazing! God is using you to inspire others