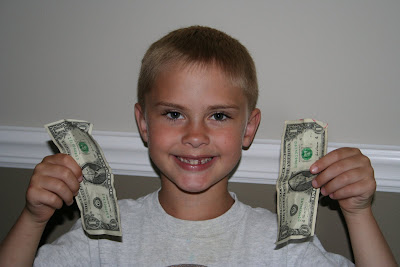 See the 2 dollars in Kobe's hand?  They have such a great story behind them and I had to share it!
Friday was a stressful day for me, S had her first 2 hour visit with her mom & I had to go see a man about some money he owed me.  #1, the first 2 hour visit was scheduled for nap time and #2 I HATE dealing with people who owe me $.  :)
So, we get to S's visit and her mom comes 15 minutes late and then tells me she can only stay for 1 hour, not 2.   OK, the was a little frustrating because I needed that extra hour!  I wanted to spend those 2 hours dealing with the person who owed me money (by the way that all worked out just fine, God made it very easy on me and I got the money that day without any problem) AND I wanted to go to VG's who was having a triple coupon sale up to $.99 without 2 kids!!!  So, I ended but going to deal with the man about the money first and then went back and picked up S.  BTW, because they were late I offered to not pick her up until 1:15 pm if they would like that and they said yes.
So I pick her up and it is so nap time.  BUT apparently I am a gluten for punishment because I am still determined to go to VGs!  I can't pass up my first chance to have my coupons tripled!!!
So, anyway, as I have stated several times, it is nap time.  Thankfully I found a cart with the little car on the front and the kids are thrilled so away we go.  After a while, my little 2 year old monster decides Kobe cannot be in the car anymore or she is going to scream.  As you can see she is all about sharing.  My darling 7 year old was nice enough to stay out of the car so she wouldn't scream.  I was very very thankful.
We get to the check out and there is no bagger and I wanted to make sure all my coupons tripled so I decided to ask Kobe if he wanted to bag since there wasn't much he could destroy.  Kobe bagged up almost all of my groceries, very nicely I might ad, and then as I was paying the man in line behind me asked me to give Kobe $2 he was handing me for his hard work.  At first I said no, but he said he wanted to give Kobe the money because he was such a great helper!
Kobe of course was thrilled and thanked the man for the $.  As we walked out to the car Kobe and I talked all about how great it was that God sent that man to tell Kobe what a great job he had done and to give him that money.  As I got in the car I had tears in my eyes thinking about God wanting to bless Kobe like that.  I could have given him $2 for helping me, but coming from a stranger it just meant so much more!  Kobe was so proud of himself and I was really proud of him too.  I hope Kobe continues to see God show up in his life that that everyday.  Seeing God doing something like that for your child is just amazing, I am so thankful for a God who is real! 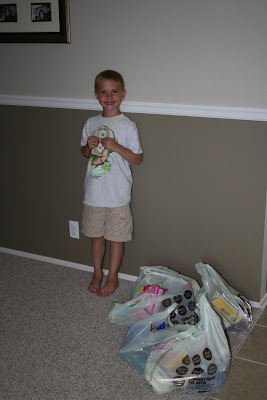 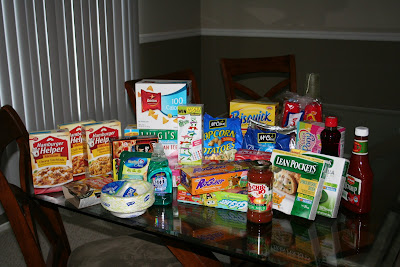 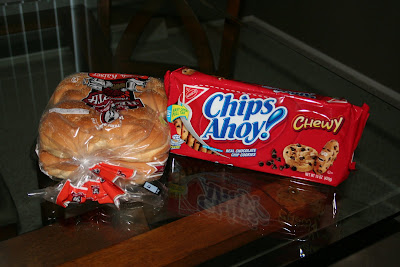 Better than shopping at the dollar store for about the same price!
Posted by Leah Wentzel at 12:40 PM

I went to vg's last week and got 25items for just under $25. It was great. I probably will go again this week!! We will see if I have time!!

Vicki you got SOFT!! But we have a right to be we are GRANDMAS. YEAH

Leah goooooood job! We have to show the kids that GOD is always present and seeeeeee's everything. He is an amazing little man and we are looking forward to having him over.

Thanks for meeting with us even on a busy day.
Love you,
Mom

Kobe is such a sweet caring person. Kobe has learned so much from you both to turn out to be the fine little gentlemen he is. I think Kobe watches how you treat people and is following by example.

I don't know how I missed your post. That was such a sweet story too. What a sweet boy you are raising. God is such an amazing Father who cares so much for us, even in the "little" things. But that was something Kobe will never forget.
Very cool that that man behind did that. Wow! That made me smile tonight.