It's amazing what a little paint can do. 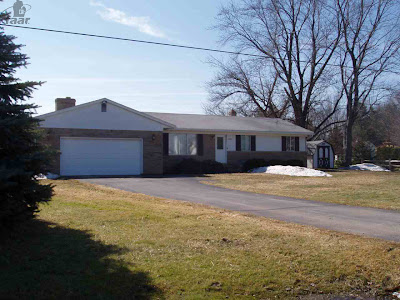 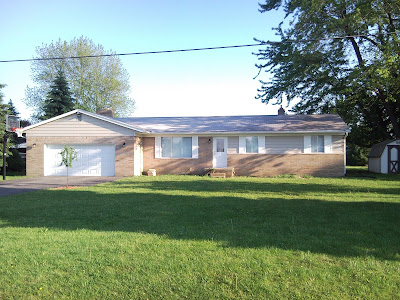 See, you can tell by the shed in both pictures that it is the same house :)
We will be putting in landscaping this week if the company I want to use can get the stuff delivered soon. Every time I look at our house I see what it can/will be eventually. Ever since we bought it I have seen it through the eye of my brains ideas of how to change it. I/we are very slow about getting things done, when you have two work-a-holics in a house it doesn't leave much time for...anything. Throw in 3 kids and you can see how quickly we move.
My awesome mom and dad came over Saturday and Mom painted the sliding while my dad trimmed all of our trees. It looks so much better around here :) While I was washing all the siding so my mom could paint it I managed to unearth a crazy electrical problem on the outside of our house where the electric runs from the power lines into our house. The lines had no "weather head" on them, (only duck tape from the last owner!) and the wires when all in a metal pole. It ends up (once I sprayed water all over it-I know, I am a genus!) and at the top of the pipe the wires come out of it started buzzing and steam started coming out. I didn't think I had sprayed it anymore than normal rain would have, but I probably did, and obviously I was concerned about it. We called the power company to come out and it ended up that, of course, it was the part we are responsible for that was the problem. At one point the wires were arcing and it was popping so we had a friend from church, who is an electrician, come out to the house and he took a look and said all the wires had rubbed raw in the metal pipe they were in and that there was no weather head so we needed that plus the meter box and just about EVERYTHING needed to be changed out. Grrrrrreat. :) So, it ended up being an easier thing (and cheap) than we thought so that was good, they came out and fixed it rather quickly Monday morning. So, now all our outside electrical situation is band new too :)
I am hoping to get the indoor/outdoor room painted and the shed at some point. We'll see. I am much more excited about the landscaping.
Posted by Leah Wentzel at 7:00 AM

It's going to look wonderful.

Looks great! We have a bunch of summer projects this summer, too.